Most people reading this article will know Pluto’s tenure in a sign corresponds to the big global issues of the day. In Sagittarius – religious warfare, 9/11 etc etc, as soon as it moved into Capricorn in 2008 – financial crash and resulting depression.

So on Friday June 13th ! 2008, Arsenal celebrated the very first minute of Pluto’s appearance in Capricorn by signing a player who would go on to symbolically put the nail in quite a few coffins, including their own. 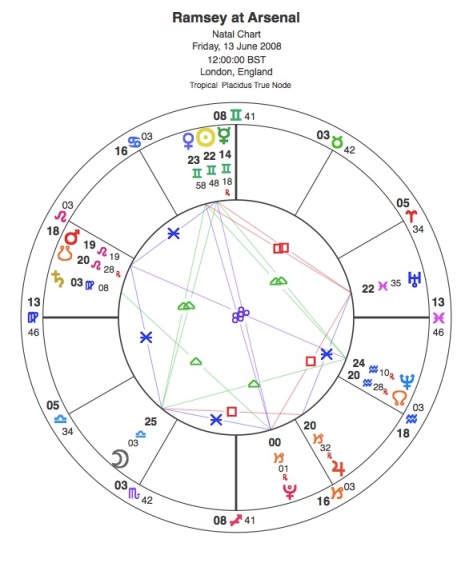 Of course they should have known better. Anyone with the slightest respect for superstition would never make a major signing on a day when the both Sun and Uranus were afflicting their Sun and Moon.

But the Gunners were simply pawns in Pluto’s much grander plan. This was a recognition that too many celebrities were getting old and its transit through Capricorn would be a perfect time for a bit of indiscriminate culling.

And what better way to do that than by using someone with a stellium in that sign.

Of course no-one noticed anything unusual during Ramsey’s first season at the Emirates, but that was because he didn’t score any goals. But as soon as the 2009 season started the Welsh reaper was off the mark.

Within a matter of days Senator Edward Kennedy was dead. No-one linked these two events. They really should have done – after all the Kennedy family were rather used to Pluto inspired curses – Curse of the Kennedys – Sun and Moon Square in Mutable Signs ?.

Ted Kennedy had Capricorn rising, so it was his time.

Its important to understand that for an attacking midfielder, Aaron Ramsey is not the most prolific of goal scorers. He went the whole of the following season without netting at all until May 1st.

By this point Pluto had made the conjunction with Ramsey’s Sun and so his goal against United that day was the Turning Point of his life, and also for most other people, marking a critically important event for humanity.

Bin Laden did not have anything in Capricorn, he was simply the standard bearer for Pluto’s sojourn in Sagittarius and had simply outlived his usefulness. So he had to go.

The conspiracy theorists amongst my readers ( I think there might be one or two of us ) might object that with no body of evidence, we cannot be sure that Osama is actually dead. Maybe he was just paid off and dropped on an obscure desert island along with his 72 virgins ( why 72 ? – more astro symbolism ).

The important fact was Bin Laden was put out of commission.

His next goal came against Spurs on Oct 2nd 2011, Steve Jobs died later that week.

Jobs had Venus in Capricorn.

Gaddafi didn’t have anything in Capricorn but like Bin Laden, was very much part of Pluto in Sagittarius and had outlived his purpose.

Maybe some of my more enthusiastic readers might be tempted to ask whether  a lack of Capricorn features meant Gaddafi was not really killed, perhaps he’s chilling with Bin Laden on that desert island. He was on video being shot and sodomized with a bayonet, but people can do wonderful things with photoshop so….

Ramsey’s next goal was against Sunderland on 11th Feb 2012. Whitney Houston died the same day.

Whitney did not have anything in Capricorn, as anyone who followed her life and loves would know, but she did have the Sun opposite Saturn, which for the Grim Reaper, is just asking for it. Whitney Houston and Bobby Brown – Queen Diva and Bad Boy

Just to prove that this culling was not limited to his Arsenal appearances, Ramsey’s penalty for Wales against Scotland on March 21st 2013 was immediately followed by the death of basketball legend Ray Williams.

Williams had Mars in Capricorn in square to his Sun.

Berezovsky had Mercury in Capricorn opposite Saturn.

I cant find any Capricorn in Walker’s chart, but when Pluto goes on a spree like this there’s bound to be some collateral damage along the way.

When Ramsey scored in the Community Shield at the beginning of the following season, Robin Williams left us the next day.

Another one with no discernible Capricorn but Saturn had just gone over his Ascendant which is enough for anyone.

Its arguable that Ramsey’s exploits against Sunderland were most painfully registered by the global community with Whitney’s passing, until another against the same team was followed by the death of David Bowie

And yes Bowie had the Sun, Mercury and Mars in Capricorn.

Ramsey scored against Liverpool on the 13th January 2016, the day after that Alan Rickman died.

Rickman didn’t have any Capricorn but as his most famous role was Professor Snape, he was surely an honorary member of the sign.

Ramsey scored against Spurs a few weeks later and Nancy Reagan died the next day.

Reagan was also not a Capricorn, but she had to go anyway, not least for abusing astrology to keep that idiot of a husband of hers in office.

When Ramsey scored against Leicester in August 2017, Bruce Forsyth passed away the following week.

Forsyth had Mars in Capricorn

When Ramsey scored again in Milan, Ken Dodd died the following day and Steven Hawking passed a few days later. Its important to remember that in European games, away goals count double.

Dodd had nothing in Capricorn but Hawking with the Sun and Mercury there made up for that.

Bristow had nothing in Capricorn, but maybe goals scored in the Thursday night cup don’t count.

So pretty impressive curse eh ? With 5 planets in the sign, Ramsey’s not quick enough to score that many, like all  true Capricorns he certainly knows how to make his efforts count.

And out of 16 victims of the Ramsey curse, 9 of them had signifiant Capricorn connections.

And Arsenal ? What next for them after this dismal decade ?

Perhaps the best news for the club is that Ramsey’s contract extension remains unsigned amidst rumours of him heading off to Juventus.

But until he, Wenger and Pluto leave, they’re unlikely to trouble the top 4 again.