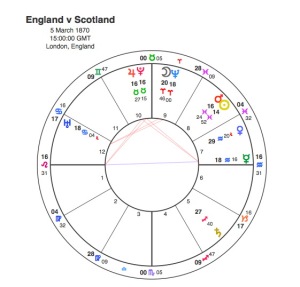 Although we can’t know the kickoff time for sure, an Ascendant in the middle of Leo allows us up to any time between 2 and 4 pm. It also works very well because the Ascendant in any chart portrays how a person expresses themselves in the world, it is their image. The image of the English football nation is very Leonine. Its basically that we invented this game and made up the rules and we therefore have a divine right to beat you all. We will condescend to allow you to play it as long as you always give us our due deference.

Leo on the Ascendant is what is displayed, three lions on the shirt and all that.

Of course unless someone is born at sunrise the Sun is going to be in a different sign to the Ascendant and this immediately creates a problem, a gap between appearance and inner reality. Some Sun / Ascendant combinations are relatively similar, it would be difficult to find one that is more different than Leo and Pisces.

Leos naturally have great natural confidence together with a very strong sense of themselves and their ability to lead others. Pisceans struggle to even lead themselves and seem to lack a clear sense of self or direction. There is a strong sensitivity about the sign and this often creates a need to retreat from time to time in order to makes sense of the many impressions gained.

So how would this combination work in international football. It has caused a kind of lofty disdain for the efforts of other countries together with an isolationist reluctance to get involved in international tournaments in the past.

England refused to take part in the first three World Cups, in 1930, 34 and 38 only condescending to turn up in Brazil in 1950 expecting to be handed the trophy on arrival. As it turned out they were handed an embarrassing beating by the amateurs of the USA. So the first of many Piscean retreats from international tournaments was arranged and that’s not counting the many that we didn’t even qualify for.

Its important to remember that this is the very first international football chart, so it should reflect that and what better way to do it than with the Sun closely conjunct Mars ( this is a competitive sport ) in Pisces ( that’s played with the feet ! ).

The Mars / Pisces symbolism is reinforced by the Moon’s conjunction with Neptune ( Pisces’ ruler ) in Aries ( Mars’ sign ).

The Moon’s position here adds to the delusion ( Neptune ) that England and their fans suffer from. They feel entitled to expect a semi final appearance in each tournament simply because of their birthright. There is no logic to it, but then the Sun in Pisces and the Moon conjunct Neptune does not deal in logic.

In the 124 years since that first game was played, England have only been World Champions once. This was the one time the tournament was held on home soil in July 1966 when both Uranus and Pluto were exactly opposite England’s Mars, and still in aspect with the Sun.

This is the kind of heavyweight shock transit that it takes for England to win a tournament, along with home advantage, biased referees ( the quarter final sending off of Argentina captain Rattan ) and blind Russian linesmen. Uranus and Pluto had not been seen together in the middle of a Mutable sign since 1901, unfortunately before anyone else had learnt to play the game.

Fortunately England had one player to take advantage of this fortuitous combination of circumstances, the only man to score a hat trick in a World Cup Final. 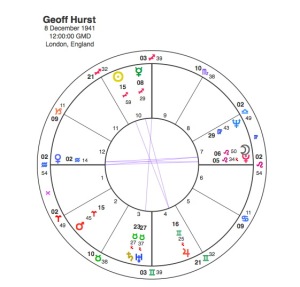 Hurst had the Sun at 16 Sagittarius opposite Jupiter so was bound to make a big impact somewhere in his life. This combination creates an exact T Square to the England Mars and was triggered by the Pluto and Uranus transit of 1966. He came from nowhere to replace Jimmy Greaves and the rest, as they say, was footballing history. ” They think its all over – it is now “.

We’ve had a few moments, notably in September 2001 when Pluto was square to the Sun as England beat Germany 5 – 1. It was also square to Mars just as we thought we were in with a shout in the tournament proper the following summer only for Ronaldinho to spoil it with that free kick.

Jupiter was sextile the Sun for Euro 1996 and trine it for the World Cup 1990, both times England reached the semis only to lose out to the Germans on penalties.

The embarrassments are too many to mention, but the defeat to the US in 1950 was accompanied with Saturn being opposite England’s Sun.

The lesson taught by the Magical Magyars when England first lost to a foreign team at home in 1953 was arranged by Saturn being opposite and Uranus being square to the Moon.

England’s failed World Cup qualifying campaign of 1973 when they lost and drew against Poland occurred whilst Uranus was opposite the Moon.

The failure to qualify for the following tournament on goal difference behind Italy was down to Neptune which squared the Sun throughout 1977.

Both Uranus and Neptune ganged up on Graham Taylor in 1993 as they were square to the Moon when they failed to qualify for the USA tournament. Do I not like that, indeed.

The recent 2014 experience had no major aspects, but Saturn square to Mercury was enough to stop England winning any matches.

The Euros in 2016 look more optimistic as Pluto is sextile Mars having been sextile the Sun through an easy qualifying group.  Jupiter is also opposite Mars in 2016 so they might even get through to the knock out rounds.

But when will the next win be ? 2049 is the next time Uranus and Pluto are in Mutables together, and the World Cup in 2054 looks promising, should get good odds if you put money on it now.