According to Philip Larkin, sexual intercourse began in 1963, which he concedes ” was rather late for me “. Capricorn Research feels much the same about football which was apparently invented in 1992, leaving me wondering what I was doing all those Saturday afternoons for the previous 25 years.

Of course even the mention of Saturday afternoons would leave quizzical looks on the generation brought up with the English Premier League as its a well known fact that only Sunderland and Aston Villa play on those days, against each other pretty much every week, or so it seems.

These days Premier League football happens at every other time of the week apart from Friday night, but apparently this startling omission is going to be corrected from 2016 onwards. Billions of Asian fans are already getting in training for a 4.00 am kick off time, grab a few hours sleep and be up in time for the next helping.

Its true that most people of Capricorn Research’s age moan constantly about the Premier league and all it stands for on the basic principle that it wasn’t like this in my day and therefore it shouldn’t be now. But this writer loves the whole thing and is constantly on the lookout for free ways to watch any games on offer almost as much as he is for obscure articles about astrology.

Many say that we have sacrificed much, a kind of never mind the quality, feel the width of our fan base. They say the England team have gone backwards since the PL started due to all those pesky foreign mercenaries coming over here and nicking our jobs.

This is Nigel Farage style thinking, and anyway who cares about England ? Capricorn Research was too young to get interested in football until just a few months after the 1966 World Cup, so my experience of the national side has been of a steady procession of sideways passes and the inevitable Mike Bassett type assault on major championships.

And anyway there are not that many astrologers that avidly wave the St George’s flag, as a rule we pretend to be above white van nationalism. 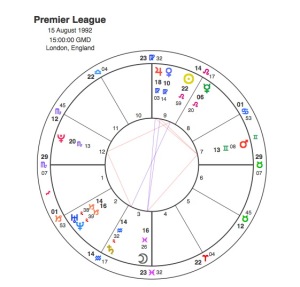 Many astrologers would no doubt point to the fact that the Sun is in Leo as evidence of the Premier League’s lording it over the competition and the 9th house placing as it’s lead position in global televised audiences.

This would be impressive if it wasn’t for the fact that every English season starts with the Sun in Leo in the 9th. Perhaps this is the simple answer to the problem, La Liga and Serie A start their seasons later once the Sun has moved into Virgo and because of the heat their matches begin once the Sun is in the 7th house.

This 7th house dominance could be the reason why these leagues invariably are two horse races, whereas the Premier League is often a free for all, with 4 or 5 teams in with a shout.

This chart explains a lot of things, not least why the league gets such a panning from the media despite its success. The Sun is opposite the curmudgeonly Saturn in the media sign of Aquarius but this criticism is water off a duck’s back as we can see by the fact that the aspect is very wide and the Sun is separating from it leaving all its critics floundering in its slipstream.

In days of yore when people generally had a more sensible attitude to astrology, important events would be timed to coincide with auspicious moments. One of the simplest but most effective methods of electing when to start an enterprise to guarantee a degree of success would be to arrange it when Jupiter was conjunct the Midheaven.

Not only does the Premier League chart have this placing but Jupiter is conjunct the other benefic planet Venus and in opposition to the Moon. So success goes without saying.

But the clearest indication of sheer bullying dominance comes from the two T Squares. A T Square is an aspect of great force, it is where the energy generated by two planets in opposition is projected strongly onto a 3rd planet which is square to both of them.

For a chart to have two T Squares is unusual, even one is not that common, but the fact that the two apex planets are the most domineering and assertive of all, Mars and Pluto says a lot.

These days the man most linked to the Premier League is its chief executive Richard Scudamore. 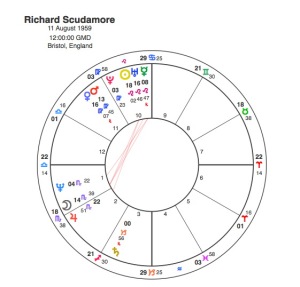 Scudamore is a powerful Sun Leo, Moon Scorpio, but more than that has very strong synastry with the Premier League chart.

Their Suns are conjunct.

And Scudamore’s Jupiter is a mere 8 minutes in orb from an exact square to the PL Sun.

His Moon / Jupiter conjunction is conjunct the PL Pluto.

Scudamore also has a close conjunction between the Sun and Uranus. When he got the job at the end of 1999, the transiting Uranus was in opposition to his Sun.

There’s no doubt that he is the right man to lead this juggernaut.

So what of the news this week announcing the next TV deal of £ 5 billion plus ? It comes into effect in the summer of 2016, just when the Premier League is experiencing its own Jupiter return in Virgo.

You couldn’t make it up, but if you could you would be very rich indeed.