What is the sound of one hand clapping ? Capricorn Research does not presume to know the answer to this famous Zen koan, but feels it could be heard on a Saturday afternoon at the Stadium of Light during the first half of any season.

Astrology deals with planetary cycles and it seems only natural that Sunderland would take after its namesake and operate by a strictly annual one.

For the last five seasons the Sunderland experience has been identical. An abysmal start followed by the sacking of the manager to be replaced by a genius who defies all the odds in saving them from seemingly inevitable relegation only to go the same way himself the following year.

Steve Bruce, Martin O’Neill, Paulo Di Canio, Gus Poyet and Dick Advocaat have all been served up to play this role, seeing their managerial CVs flying high only to crash and burn a few months later.

All 5 of them will have brought their particular characters to the role, but this time round the Black Cats saviour had an extra tool in his armoury – transcendental meditation.

On the face of it ” Fat ” Sam Allardyce is not a character you’d associate with the repetition of mantras unless they were of the four letter variety, but then if astrology teaches us one thing, its not to be deceived by appearance.

One’s true inner self is said to be indicated by the Sun in the chart, the way we appear to others by the Ascendant. Sadly we do not have a birth time for Allardyce but his Moon in Leo conjunct Jupiter opposite Mars in Capricorn gives the impression of a strong willed and thick skinned fighter, who will go his own way whatever anyone else says.

But in fact Sam Allardyce has a delicate Sun / Neptune conjunction in Libra, and his main interest is in spiritual ( Neptune ) harmony ( Libra ).

Capricorn Research has met many people who claim to practice meditation in many different forms, and they tend to fall into two categories. One group practices barely at all, but talks about it constantly. The other lot practice it every spare moment but will only admit to dabbling a bit here and there. I believe that Allardyce is definitely in the latter category.

Just as it began to look as if he would manoeuvre Sunderland out of the relegation zone, having been written off by pretty much everyone, Sam comes out and admits to doing a few mantras to keep him relaxed under pressure.

He has famously never been relegated. There are plenty of big name managers who share that, but to be fair they haven’t been in charge of Bolton, Newcastle and Blackburn.

Now it all makes sense. How he managed to take West Ham from the Championship to be comfortably placed in the top half of the Premier League despite all that flack from the Upton Park crowd for not doing it in the true Hammers style.

Transcendentalists are known for never revealing what their own personal mantra is, but Allardyce could be forgiven if it contained expletives and Russell Brand.

Whatever it is, you can be sure he’s been repeating it constantly this season, even in the technical area. In fact he even looks like a Buddha.

For some reason the Lord Buddha is always depicted as having a round face and a huge belly. This may be because he sat on his arse for long periods of time but it certainly wasn’t down to eating pizzas.

But its interesting that another manager in the Gautama lookalike stakes would be Sam’s old rival and current north east relegation sufferer Rafa Benitez. 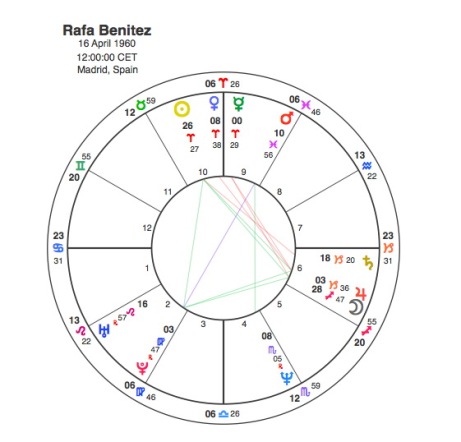 Allardyce and Benitez have history. In previous incarnations at Blackburn and Liverpool they clashed frequently over playing styles.

Its hardly surprising then that Rafa’s Sun at 26 Aries is exactly opposite Sam’s at 26 Libra.

Everyone concurs that Newcastle brought in Benitez too late to stop the rot. However as Neptune was conjunct his Mars for most of this year, he was never going to succeed on Tyneside or in Madrid for that matter.

One of Big Sam’s beefs is that English managers like him never get the chance to run a big club. He once claimed that with his record if he’d been called Allardici he would have been snapped up by Real.

But maybe thats how it works. By doing his mantras Sam Allardyce is not only steering Sunderland calmly through the choppy waters but is storing up karmic brownie points which will see him come back in the next life as manager at the Bernabeu.

Readers may scoff at such a suggestion but its been proved beyond any reasonable doubt that the two reasons for Leicester’s title success were that Claudio Ranieri is a reincarnation of Richard III  and their Thai owners have commissioned vast numbers of Buddhist monks to chant for them.

But if football does work like this we should be worried for Rafa Benitez. Falling from Madrid to the Championship in just a matter of a few months looks suspiciously like someone who is neglecting his karmic duties. Much more of this and he’ll come back as someone who gets poked in the eye by Jose Mourinho.

Someone get Rafa a mantra quick or he’ll end up at Everton.