Timing in life is everything. All comedians know this, even Conservative politicians.

As a rule they’re pretty good at it too. Take the absolutely genius idea to fix the UK General Election date for the 1st Thursday in May. This means that it will always occur in the most conservative, fixed sign Taurus.

Not only that, because the polls open at 7.00 am, this means that the chart for each election will have Gemini rising. Therefore the chart ruler, Mercury will almost always be in either Taurus or Gemini.

Its obvious that its placing in Taurus is unlikely to challenge the status quo, but even if in Gemini it means that the planet that rules the incumbent party will be in dignity and therefore in a much stronger position to stay in power.

Not only that but the Sun and Mercury would be hidden in the 12th house, so noone would realise they had stooped to such subterfuge to pretty much guarantee a Tory government in perpetuity.

If David Cameron took astrological advice on the timing of fixed general elections, he has definitely dropped it for the EU referendum. Instead of using reliable cosmic sources he seems to have put all his trust in another field that he knows nothing about – football.

Why June 23rd ? Well at that time England will be in Paris competing in the Euros.

Isn’t it a bit risky having the referendum at a time when our boys may be performing their own enforced Brexit, shuffling back to Heathrow with their tails between their legs after yet another major tournament embarrassment at the hands of our more sophisticated continental opponents ?

Well Cameron might be an old Etonian idiot but he’s not stupid. The 23rd comes just after the group stage and before the straight knock out phase begins. If he’d set it up for the following Thursday, we would have already had the round of 16 and be at the quarter final stage. And we all know what traditionally happens to the Three Lions then.

Most of Cameron’s opponents have mocked his rather pathetic attempts to negotiate a reasonable deal from the EU, but what he has managed to do is get UEFA to pretty much guarantee England will still be an optimistic participant in a thriving Euros.

The goalposts have been shifted for this tournament. UEFA have expanded it from 16 to 24 countries, which basically meant you only had to turn up to qualify for the thing in the first place.

So England won every qualifying match they played and there was also even room for Wales and Northern Ireland to get through as well.

On top of this, the new format means that as well as the top two places in the group going through to the post June 23rd knock out phase, the four best 3rd places ( out of six groups ) go through as well.

As well as that, both England and Wales have been handed possibly the easiest group of the six. Everything possible has been done to ensure that they are still full of the usual pre tournament optimism by the time the whole country is asked ” Do you want to leave the Euros ? ”

As readers of these articles know well, the Universe is run by symbolic linkage, so the subliminal context running through most of the white van men in the country at the time would be ” why the hell should we leave, we’re doing so well and were going to stay in and win it “.

Anyone that believes the choice of June 23rd for Brexit was a pure coincidence, needs to read more of these articles.

But was it a wise choice ? If England really did the unthinkable and fail to make it out of this group phase, surely the ignominy would be so great that the whole populace would take their revenge and turn their backs on the EU.

England manager Roy Hodgson has no transits to speak of good or bad.

Hodgson had Jupiter conjunct his Sun / Venus / Saturn / Pluto conjunction in Leo throughout most of the qualifying campaign and his 100 % record is simply a reflection of that. But Jupiter has long gone and is no use to him now.

Most pundits get very upset when managers get the sack. However Capricorn Research believes Roy should have been let go of after the qualification campaign and the England job should have gone with someone with a Sun / Jupiter conjunction in mid Virgo. Slaven Bilic would have been a perfect fit for the Euros.

Wales’ manager Chris Coleman has nothing to speak of either. Nor does Northern Ireland’s Michael O’Neill, but in this case just making up the numbers in a group that includes the World Champions Germany, Poland and Ukraine is an achievement in itself.

This was clear from O’Neill’s transits. Pluto was opposite his Sun throughout the brilliant and astonishing qualifying campaign marking the turning point of his life. Its moved on now.

So with no managers’ transits to go on we have to look at the charts for the games themselves.

England as favourites are Jupiter, ruler of the Sagittarius Ascendant. Russia is Mercury.

The Moon is conjunct Jupiter showing the English confidence going into this match. But it is separating from Jupiter, which means the match slips away from England. We may get an early lead but I don’t think we’re going to win.

There is a mutual reception between Mercury in Taurus for Russia and Venus and Gemini, so I think help from an unusual quarter could give Russia an equaliser.

The Moon will eventually make a trine with Mercury, so I’m thinking a lot of Russian pressure towards the end with them looking the likely winners. But the Moon / Mercury trine doesn’t quite make it to fruition before Mercury changes sign.

So I’m going for a draw. 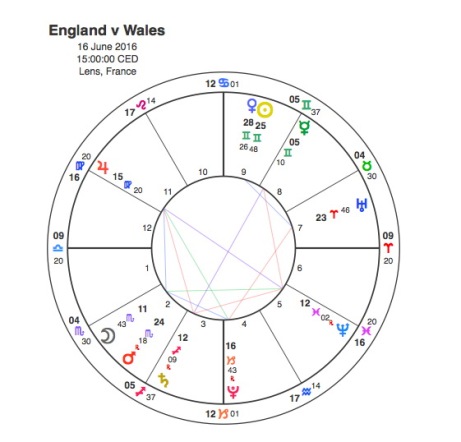 This time England is signified by Venus ( ruler of Libra ). Venus is combust while Mars for Wales is dignified in Scorpio although it is also retrograde.

The Moon is applying to a conjunction with Mars suggesting a win for Wales, although there’s 12.5 degrees between them so it could be a tightly fought game with a late winner.

By this time David Cameron will be really worried because England could well be bottom go the group with 1 solitary point.

His football credentials have not served him well this season as his declared team, Aston Villa have just been relegated with the most appalling displays ever witnessed in the Premier League. Perhaps Cameron had this in mind when he came out as a fan of West Ham or more likely he has no interest in or knowledge of the plebs game, and just desperately asked one of his flunkeys to provide him with a club name so he could get some street cred.

At this very point he is no doubt in consultation about changing his allegiance to Wales, citing his christian name as evidence of his connection.

However the final match should come to his aid.

The Moon makes a trine to Jupiter for England and no major aspect to Mercury. Again there’s an orb of 12 degrees to make up so it could take the Three Lions until the 2nd half to impose some kind of superiority.

The Wales v Russia match would have a very similar chart as it kicks off at the same time. The problem here is that its difficult to predict either game because the chart will be referring to one but we don’t know which one.

If we take Wales as favourites therefore Mars, Slovakia is Venus.

The Moon actually applies to both, Venus by square and Mars by sextile. It reaches Venus first so this could suggest a win for Slovakia.

Venus in Gemini is in mutual reception with Mercury in Taurus, which suggests Slovakia could get some unexpected assistance. Perhaps a slow witted linesman fails to pick up an offside for a Slovakia goal.

However the Moon still makes a contact with a strong Mars in Scorpio. It looks like a draw is on the cards here with a late equaliser from Wales.

So there is a chance that Wales could top the group. Gareth Bale has some interesting transits. He has Uranus square his Sun over the next few months and Jupiter sextile his Sun for the first fortnight of the tournament, so I expect him to be a major factor in Wales progressing to the next round.

Northern Ireland are in a very tough group, the charts of their matches make it even harder. They could easily lose all three, but a creditable, backs to the wall performance with a draw in the opening game with Poland is a possibility.

So Michael will be doing a Brexit and Chris will be in the remain camp but what about Roy ? Will Dave’s big gamble on England getting out of their group come off ?

Its hard to say, with Group B being as difficult to predict as the referendum itself.

My own view on Brexit is that it was 70 / 30 to remain based on Cameron’s own Jupiter transits over the next few months. But England’s possible banana skin has made me rethink. At the moment I’m on 60 / 40 to stay in the EU.

Mind you we might be tempted by another referendum to get independence for Wales.

2 thoughts on “Who Will Make an Early Brexit, Roy, Chris, Michael or Dave ?”