As befits a nation with the Sun in Capricorn and the Moon in the 12th house in the last degree of Pisces, England’s approach to most things is inward looking and isolationist. This is particularly true with international football.

A good example would be the African Cup of Nations, which is completely ignored to the point where hardly anyone could name the current holders without guessing. The average English fan’s view of it is as an annoying way of stopping Yaya Toure from playing for Man City, or Abu Dhabi United as they ought to be called. Thats the thing about our isolationism, its selective.

So its not surprising that more coverage in our press is given to the concerns about Daniel Sturridge’s latest Neptune inspired injury than to the oldest international tournament in the world.

This despite the fact that its the 100th anniversary, the world’s best player, Lionel Messi, has so far been unable to win it and he will be lined up against his own club mate and La Liga’s top scorer, Luis Suarez.

Perhaps its not surprising that the Copa America has very little coverage this year as it clashes with our own continental scuffle, Euro 2016, but Capricorn Research can reveal that there is a deeper reason for this lack of global recognition. Its to do with its inception chart. 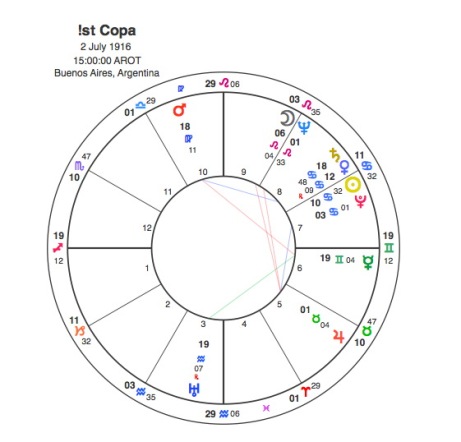 Cancer is a sign that is content to stay within its own borders and does not look for international recognition. Whilst its true that most international tournaments happen in the early summer and are therefore bound to have the Sun in Gemini or Cancer, a stellium of 4 planets in this sign including Saturn suggests that it is happy to be largely ignored by the rest of the world.

The Moon conjunct Neptune in Leo would suggest that the South American view is that it is the strongest tournament anyway, certainly with the best and most exciting players.

But maybe its Mars in Virgo in the 10th house that explains why its relatively ignored on a global level. Virgoans, after all do all the work and get none of the credit for it.

For the first time ever, the Copa is being staged outside South America, in the USA. This in itself is staggering, it would be like the Euros being held in China or Qatar, which by the time our tournament reaches three figures, it almost certainly will be.

Most observers think the reason for the Copa kicking off in California rather than Montevideo is purely financial. As Jupiter will be transitting the 1916 chart Mars over the next month, that view seems quite fair. But will it be a success though ?

The chart for the opening match is a very strange one. The Sun and Venus are part of an extremely close Grand Cross with an exact opposition to Saturn and close squares to Jupiter and Neptune. On top of that the Moon is opposite Mars.

The final of the first Copa was held in Buenos Aires and won by Uruguay, but only after the match against Argentina had been abandoned amid rioting and replayed. Given that the Sun in 1916 was conjunct both Saturn and Pluto in Cancer, perhaps it was not surprising that the hosts got so upset.

But the Grand Cross for 2016 has got to be worrying. Given Saturn and Neptune’s role in issues around migration and religious terrorism, we could be looking at a tournament that is disrupted for non sporting reasons.

As both the Sun and Moon are afflicted in Gemini, maybe thousands of Central and South American fans will take the opportunity to make loud protests against Donald Trump.

Its interesting how the Mars in Virgo theme runs through much of South American football. The first international match in the continent was between Uruguay and Argentina in 1901 with Mars at 2 Virgo. Brazil’s first match although 13 years later had Mars at 15 Virgo. Needless to say these 3 teams have won 37 out of the 44 tournaments held.

Paraguay manager Ramon Diaz has a stellium in Virgo including the Sun and Mars.

Ecuador’s Gustavo Quinteros has Mars in Virgo as does Costa Rica’s Oscar Ramirez.

Colombia’s Jose Pekerman has the Sun in the sign and Argentina Manager Gerardo Martino has the Moon there.

Scorpio also scores highly amongst the managers. Brazil’s Dunga and Martino  have a stellium in the sign while Juan Pizzi of Chile, Ricardo Gareca of Peru and Hernán Gomez of Panama all have the Moon there.

But who will win it ? Capricorn Research is loath to predict because the Jupiter / Saturn  square scuppers the simplest method.

Uruguay’s Oscar Tabarez, Mexico’s Juan Osorio, Ramirez, Pizzi, Pekerman, Martino, Gomez all have major chart points in the middle of the Mutable signs. The Brazil chart also has Mars there.

Durga may well have the transitting Uranus conjunct his Moon ( depending on birth time ).

So its a fair bet that the 2016 winner will be one of Brazil, Argentina, Uruguay, Mexico, Costa Rica, Chile, Colombia or Panama.

But watch out for a powerful showing from unfancied Venezuela. Their manager Rafael Dudamel has a Sun / Jupiter conjunction in Capricorn and Pluto is hovering around that now.

I’m very tempted to watch it, particularly as the Euros kicks off with Saturn bang on the Ascendant, suggesting our own tournament will be a boring spectacle, taking time to get going.

For once the Copa America might being played in the North, but the opening chart suggests the Latin temperament will be displayed on a grand scale.