The announcement that astrologically perfect manager, Louis Van Gaal is to take over at Man United finally came some weeks after that media had given him the job. The only reason that it wasn’t announced earlier was that the club had to persuade him to take on the man with over 1000 matches as a player and 4 as caretaker, Ryan Giggs as his assistant.

This marked a break from the recognised tradition, where incoming managers bring in ” their own people ” and discard anyone linked with the previous regime, despite the glaringly obvious fact that their knowledge of the players at the club would come in handy.

Telling Van Gaal what to do was always going to be a tricky business as anyone who has tried preaching to a Sun / Pluto conjunction in Leo would surely testify. So we had to witness Giggs being summoned to the Dutchman’s house on the news so that we were in no doubt as to who was controlling the agenda before the final coronation was waved through by United.

So we are all now left wondering whether Giggs’ actual role will be anything other than symbolic as the senior member of the class of 92, particularly as Van Gaal seems set to use fellow Dutch Leo, Robin Van Persie as his eyes, ears and captain.

A quick comparison of the charts of Van Gaal and Giggs does hold out some hope for a fruitful relationship, however.

They have their Suns in trine ( Giggs being a Sagittarius ) and their Moons are in square aspect ( Giggs in Capricorn, Van Gaal in Libra ). They both have the Moon in square to Mars and Uranus, and as a consequence of that their Mars’ are square to each other.

In fact Giggs does have quite a few of the classic managerial aspects in his chart, so maybe Van Gaal is really at United as a short term measure to get them back to the top after a disastrous, Saturn plagued season and then to hand over the reins to the Welshman.

The whole question of whether assistant managers work any more than technical directors in a field where everything has always been dominated by the character of the one boss, is one area of research that might yield some interesting astrological findings.

Capricorn Research believes that if the relationship is going to work for the club it should be characterised by close aspects between manager and assistant. These aspects would not necessarily be easy ones though. In sport, success comes from the extra effort generated through conflict more than sympathy.

Its also true that if manager and assistant have planets in square aspect to each other then they have covered more bases. There’s no point in having an assistant with a similar chart to the manager, its useful to have someone sitting next to you in the dugout with a different take on things.

So Giggs square aspects of his Moon and Mars to those of his manager, might work out well, just as long as he remembers who is boss.

In fact the greatest managerial double act in history packed quite a few square aspects. They argued a lot and split up acrimoniously, but their success in taking a second tier team to win 2 European Cups and almost doing the same with another club only to be frustrated by Juventus’ cheating in the semi final, is unparalleled.

Brian Clough will always be remembered for his exploits with Nottingham Forest and Derby County, but such incredible success could not have happened without assistant, Peter Taylor. 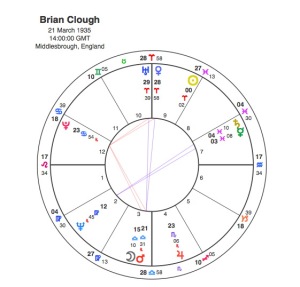 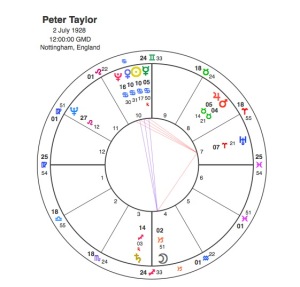 We don’t have birthtimes for either of these two great men and sharp eyed observers will note that Brian Clough’s chart was constructed for 2.00 pm rather than the customary noon.

This is because any time before 2.00 pm would have put his Sun at the tail end of Pisces and if there is one certainty in life it is that Clough was an Aries not a Pisces.

Its interesting that both men have the Sun and Moon in opposite signs, Clough in Aries / Libra and Taylor in Cancer / Capricorn.

This also results in the classic two way match up for people in a relationship. Clough’s Moon is square Taylor’s Sun and Taylor’s Moon is square Clough’s Sun. It also means that the combination of the two men covers the first half of each of the Cardinal signs.

Cardinal signs are known for their ability to act quickly and decisively and to inspire others to action. Between them they have literally covered all the Cardinal bases.

With a Cancer Sun and Capricorn Moon its likely that Taylor would take the back seat supporting role to Clough’s Aries / Libra combination, but his T Square makes it inevitable. Taylor has the Sun and Moon in opposition which focuses onto an apex Uranus in Aries which is conjunct Clough’s Sun. So the main thrust of Taylor’s life is towards the individualistic, unconventional and frequently disruptive ( Uranus ) and always assertive ( Aries ) figure of Clough.

Clough’s chart is fascinating. The Aries Sun together with a Venus / Uranus conjunction in the sign is what everyone saw as the brash, controversial figure that led his teams but he also had the Moon and Mars in Libra so he would be very aware of when to put an arm round the shoulder of his players as well as the kick up the backside approach.

Venus and Mars are opposite each other and also in the other’s signs. And with Brian Clough, players, assistants and supporters were never sure whether they would get a kiss or a clip round the ear. This opposition focused by T Square onto an apex Pluto, so the results were usually explosive. His impact on the conventional world of football management in the 70s was atomic.

Clough is known for two of the greatest achievements in football management. Taking Derby from the second division to become League Champions in 1972 and then doing the same thing with Nottingham Forest in 1978 only to top it winning European Cups in 1979 and 1980.

Of course these two achievements marked the Pluto peaks of his life. In 1972 Pluto was opposite his Sun and in 1978 conjunct his Moon. In 1979 and 80 it was conjunct his Mars.

This would be extraordinary enough but those who lived through the period and those who watched ” The Damned United ” will know that its not the whole story.

As his Sun and Moon were also in the 1st half of the Cardinal signs, Peter Taylor had his own most significant turning points through the same period.

Pluto was square Taylor’s Moon for Derby’s league win in 1972. Clough and Taylor left Derby after a famous row with the chairman, Sam Longson and emerged at Brighton.

Clough was offered the job to replace Don Revie, who had become manager of England, at champions Leeds United in 1974 but whilst Saturn was creating a T Square to both his Sun and Moon, the abrasive style worked against him and he lasted a mere 44 days at Elland Road.

Taylor did not go to Leeds with him and took on the manager’s job at Brighton. The film, ” The Damned United ” captured the affair beautifully with Clough and Taylor falling out, only for Clough to realise how much he needed his partner and to persuade him to come and join him at Forest which he did in 1976.

This was the turning point in Taylor’s life as Pluto was square his Sun from 1974 – 76 and what followed with Forest was football history and the scale of their success would probably never be repeated.

The Leeds experience also confirmed that it was the Clough / Taylor double act that powered the whole thing, on their own they had very little success.

Was Cloughie the greatest manager England never had ? The FA don’t do apex Plutos as their managers and he was overlooked in favour of the more conventional and far less controversial Don Revie, which turned out to be a disaster.  Just think what could have been achieved in 1978 in Argentina with Pluto conjunct Clough’s Moon and Mars .