The City of Napoli is famous for many things, the ice cream and the pasta sauces of course but also the idea of it being a place with a wealth of history that has suffered at the hands of its counterparts in the north of Italy. The idea that you ” see Naples and die ”  may not be an actual threat, more that you have ticked the most beautiful box of all on your bucket list, but along with the links to the mafia, Capricorn Research feels that the city resonates strongly with Scorpio. 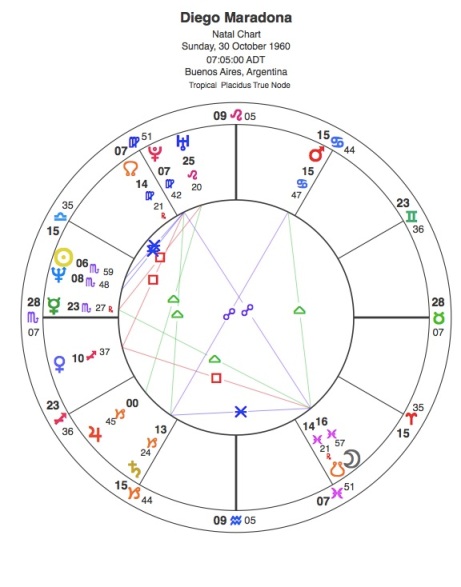 A double Scorpio with the Sun closely conjunct Neptune and the Moon in Pisces, Diego Maradona has often been seen as something of a religious, messianic figure particularly at Napoli.

When Maradona arrived in 1984, no Southern mainland club had ever one the Italian League. While he was there, Napoli won it twice, and never since he left.

Naturally his synastry with the club chart is very strong. 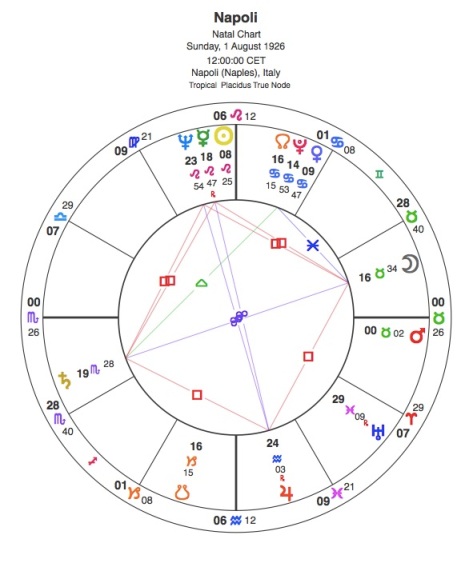 The Napoli Sun at 8.25 Leo is in close square aspect to Diego’s Sun and exactly square to his Neptune, the planet that gives him the status of a spiritual icon.

The Napoli noon chart places their Moons in exact sextile aspect and Maradona’s Mars is conjunct the club’s Venus / Pluto in Cancer.

But as with all of these quasi spiritual connections in football, its not just a case of the synastry between the two, but of the timing of their coming together.

The same planet’s transits connected strongly with the Napoli chart.

Diego arrived in the summer of 1984 when Pluto first moved into Scorpio, opposing the Napoli Mars and conjunct the noon chart Ascendant, a perfect sign of a great new era for the club.

In 1987, as Pluto was exactly square the Napoli Sun, the club won the double including Serie A for the first time.

They won the league again in 1990 with Pluto opposite their Moon and Jupiter conjunct their Sun.

After that summer’s World Cup, the Italian football federation forced Maradona to take a doping test, which he failed testing positive for cocaine ( the other side of Diego’s Sun/ Neptune conjunction )

Both Maradona and Napoli staff later claimed that the drug test was revenge for Diego’s call for Neapolitans to support Argentina instead of Italy because of the North / South inequality in the country. Maradona was banned for 15 months and would never play for the club again.

And almost immediately a decline set in at Napoli.

As Neptune opposed Napoli’s Sun in 2001 – 2, the club was relegated to Serie B and suffered huge financial difficulties. Napoli even went bankrupt and had to play in Serie C while Neptune was square their Moon.

But now for the first time since Maradona’s day they find themselves at the top of Serie A. Can they win it this season ?

Well there are interesting parallels.

Just as Maradona’s arrival began with Pluto hitting the Napoli Mars / noon chart Ascendant, Uranus reaches this configuration at the end of the current season.

Uranus is about to move into Aquarius and so will conjunct the Napoli Mars. 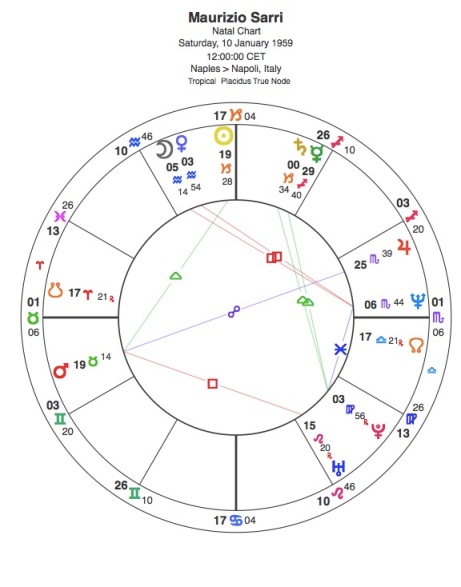 His Sun is trine the club’s Moon and his Moon is opposite the Napoli Sun.

Sarri’s Mars is also conjunct the Napoli Moon. These connections are easily as powerful as Maradona’s. So is the timing.

Just as in 1987 Napoli’s Serie A win came with Pluto conjunct Maradona’s Sun, the planet is now conjunct Sarri’s at 19 / 20 Capricorn.

Jupiter is also opposite his Mars and the Napoli Moon towards the end of the season.

Appropriately Napoli and their hated rivals from the North, Juventus have their Suns in hard square aspect. The Juve Mars is also opposite the Napoli Moon.

And the problem for Napoli is that Jupiter is going through Scorpio.

The northern giants have just won the title for the 6th consecutive time ( an Italian record ) and been Champions League finalists for 2 of the last 3 years. No doubt some complacency had set in as they got off to a poor start this season.

Jupiter on Juve Sun rectified that and they are now only a point behind Napoli.

What is more Jupiter will be on Juventus’ Mars at the end of the season.

So this title is going to be a difficult one to call. Both clubs have strong transits, although Napoli’s look to be more powerful.

Of course, Pluto on Maurizio Sarri’s Sun might mean he get’s poached by one of the richer clubs but he’s a local lad and he might just fancy the taste of one more Scudetto.