Manchester City are the one club that everyone should despise. They have singlehandedly destroyed the Premier League by spending vast sums of their owners oil revenues on overlapping full backs.

And yet there is something about them that makes us turn our heads away from the economic and political obscenity of their backing and still enjoy their steam rolling victories.

For Capricorn Research it has more to do with their history and their fans. City fans have always lived in the shadow of their illustrious neighbours at United. For 34 years that banner was held up at Old Trafford, and during that time City plunged to the depths of the third tier. Even when they did win the League in 1968, United immediately trumped it by taking the European Cup.

But more than that City fans ( those over the age of 20 anyway ) do not show the sense of entitlement shared by so many followers of the bigger clubs. They have a strong sense of the ups and downs of fortune, hence their choice of anthem ” Blue Moon “.

The Moon as we all know rules the tides, emotions and the things which change from hour to hour.

A Blue Moon is when there is a second Full Moon occurring within a calendar month, something that happens every 2.7 years. So by choosing it as their theme, City fans are showing their recognition that success comes rarely and it is to be treasured all the more.

The City chart has the Sun in Aries opposite Saturn which does point to a club whose great ambition and energy has been thwarted and frustrated so many times in the past.

But why have things changed so powerfully this season ?

Its all down to Uranus which is conjunct the City Sun for most of this season. This really does only happen once in a Blue Moon because it takes 84 years to go round the Zodiac. 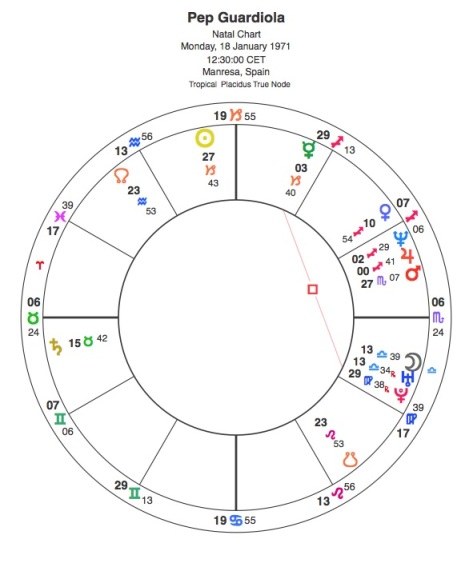 City manager Pep Guardiola has a strong connection with this transit. Guardiola’s Sun is at 27 Capricorn, in very close square aspect to the City Sun.

This means that Uranus is square to Guardiola’s own Sun this season.

And Uranus is immensely powerful in his chart because it forms an exact conjunction ( within 5 minutes ) of his Moon.